Before CSI There Was... 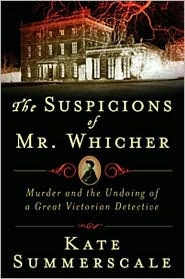 The Suspicions of Mr. Whicher: Murder and the Undoing of a Great Victorian Detective
by Kate Summerscale

In 1860, a three year old English boy disappears from his room in Road Hill House, where his nursemaid and younger sister sleep. He is later found with his throat cut in a privy and the case quickly becomes a media sensation. When local law enforcement fails to make progress, Scotland Yard sends the best of their eight detectives - Mr. Whicher- to investigate. This sparks a national fascination with detectives and inspires the detective fiction genre. Charles Dickens wrote his theories of the case to Wilkie Collins, who in turn based his Sgt. Cuff in The Moonstone upon Mr Whicher.

When the Scotland Yard Detective arrives at Road Hill he finds limited evidence, but a multitude of suspects and family secrets. When he accuses and arrests the boy's sixteen year old half sister of the crime, the tide of public opinion turns against him, refusing to believe a family member could commit such a crime. Mr Wilcher returns to London in disgrace, leaving the crime unsolved, until years later.

More then a true crime story, this is a fascinating peek into the lives and minds of middle class Victorian England as well as the society as a whole. The research is impressive and thoroughly documented with footnotes and references, but at the same time it is an enjoyable read.

Mercer is a rookie cop, a straight arrow sort, who can quote "The Rule Book," chapter and verse. His beat is Colma, California, the cemetery capital of the San Francisco Bay area. One night, while patrolling Cypress Lawn, he stumbles into what looks like a drug related crime involving a teenager. Mercer finds the boy naked and bound with duct tape, stuffed in a burial chamber in an obscure part of the cemetery. As the police rush the barely breathing boy to a hospital, Lilly Hitchcock Coit (of Coit Tower fame) observes the police cars and ambulances with interest. Though she is dead, she has not eaten the root of oblivion, and can still haunt the living world. As she passes, Mercer senses something not quite right, but sees nothing disturbing. Lilly is excited to note another potential "crosser," and hopes that he will be stronger than the last one. Can Mercer become the hero he desperately wants to be?
Doug Dorst in Alive in Necropolis spins a tale of trouble in the intertwined worlds of ghosts and humans with Mercer caught in the middle of both. The earthside story of Jude, the troubled youth found in the graveyard, blends with that of a deadly gang of ghosts bent on sending the spirits of the cemetery to their real deaths. Dorst skillfully creates two believable worlds of the imagination, using many of the old colorful characters who thrived in the crazy town of San Francisco. Strange and different, this is a book for readers who won't mind if their police procedurals are turned upside down.

Posted by Donna at 7:27 PM No comments: Links to this post